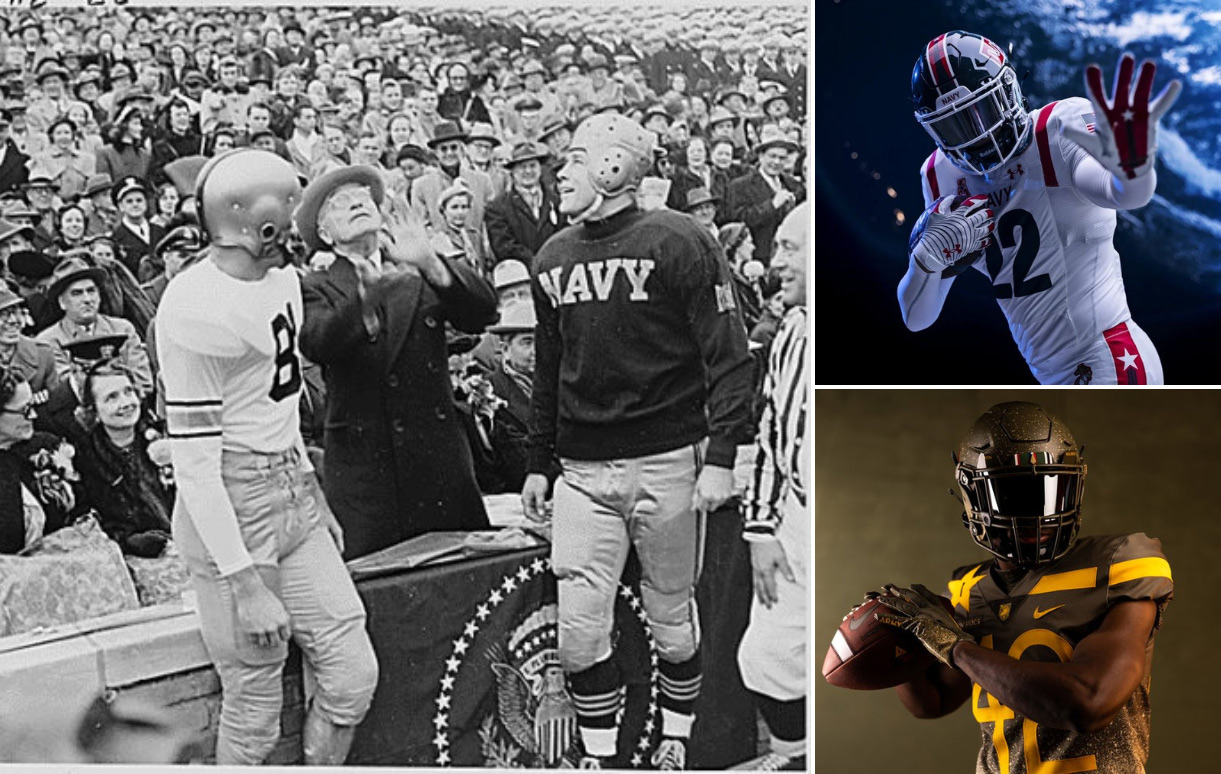 The Army–Navy game is one of the most traditional and enduring rivalries in college football. Since 1890, the Army Black Knights of West Point in New York and the Navy Midshipmen of the U.S. Naval Academy in Annapolis, Maryland have faced one another.

It marks the end of the college football regular season and the third and final game of the season’s Commander-in-Chief’s Trophy series, which also includes the Air Force Falcons of the U.S. Air Force Academy. This year will be the 132nd Army-Navy game, with the Midshipmen leading the all-time series 62-53-7. Learn more about the history and traditions behind the Army-Navy football game.

The rivalry between Annapolis and West Point, while friendly, is intense. The phrases “Beat Navy!” and “Beat Army!” are ingrained in the respective institutions and have become a symbol of competitiveness, not just in the Army–Navy game, but in the service of the country.

Army and Navy first met in 1890 at the U.S. Military Academy at West Point, New York. In 1893, the first football helmet was used and then in 1901, Theodore Roosevelt was the first sitting president to attend. Navy’s 14-game win streak from 2002 through 2015 is the longest in the series, with the largest win being a Navy victory 51-0 in 1973.

Philadelphia has been the traditional home of the Army–Navy game. Through the 2021 meeting, 89 of the 122 games in the series have been in Philadelphia, including every game from 1932 to 1982. It is selected as the site due to the historic nature of the city and the fact that it is approximately halfway between West Point and Annapolis.

Mascots were introduced to both the U.S. Military Academy and Naval Academy in the 1800’s. For West Point, the mule reflected a long-standing history in the Army and was chosen to counter the Navy’s goat at the 1899 Army-Navy game. The first mule mascot was outfitted with a collar, gray blanket and leggings with Army-colored streamers attached to his ears and tail.

In the midshipmen’s case, the mascot chose them. In the 1880s, when Navy ships sailed with livestock as a source of food, one goat was spared and given the role of crew pet. In 1890, Bill the Goat entered Naval football tradition; a symbol of the “tough, warrior mentality.”

A popular topic of conversation is what both teams are wearing! This element of the Army-Navy rivalry never disappoints. Check out this year’s alternate uniforms:

Army and Nike teamed up to tell the story of the soldiers of the 1st Armored Division during World War II. This year marks the 80th anniversary of Operation Torch and the commencement of American ground operations against Axis forces in the European theater, which included North Africa. Learn more: Old Ironsides

Over the years, the uniforms may change but one thing remains the same: “America’s Game” continues to be a defining moment in the college football season, and in the hearts of military families around the country.