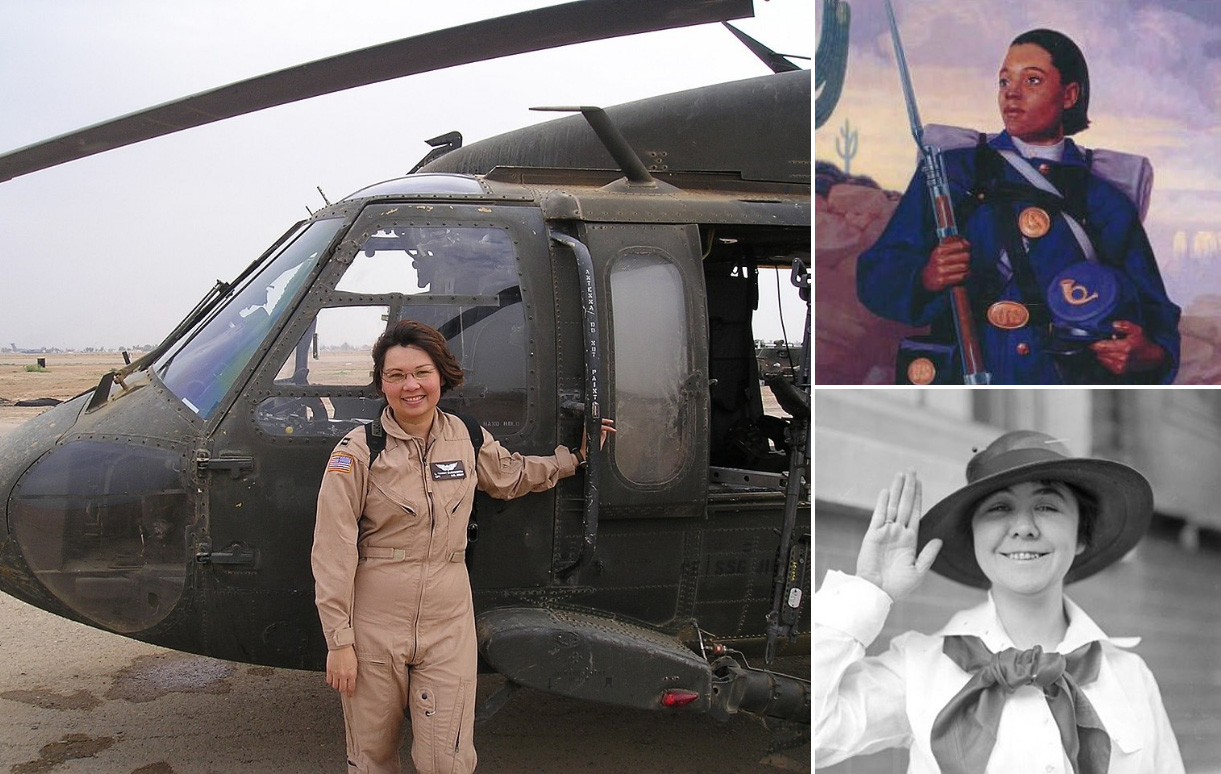 Since the Revolutionary War, women have been serving in the United States military. These women refused to accept the status quo and found ways to serve as nurses, cooks and seamstresses, and at times, disguised themselves as men to fight for their country. We explore the stories of courageous women throughout the decades who took the path less traveled and ultimately, paved the way for future generations.

Susie King Taylor was the first Black U.S. Army nurse and tended to an all-Black Army regiment named the 1st South Carolina Volunteers (Union), where her husband served, for four years during the Civil War. Despite her service, like many African American nurses, she was never paid for her work. As the author of “Reminiscences of My Life in Camp with the 33rd United States Colored Troops, Late 1st S.C. Volunteers,” she was the only African American woman to publish a memoir of her wartime experiences.

Dr. Mary Edwards Walker was a suffragist, prisoner of war and surgeon. Walker chose to volunteer at the beginning of the Civil War but was only given the opportunity to be an unpaid field surgeon near the Union front lines. She petitioned the War Department multiple times and was eventually employed by the Army of the Cumberland as the first female surgeon of the U.S. Army Surgeons. After the war, she was approved for the Medal of Honor, for her efforts to treat the wounded during the Civil War. She is the only woman who has received the Medal of Honor.

In 1866, six all-Black cavalry and infantry regiments were created after Congress passed the Army Organization Act. Private Cathay Williams was the first African American woman to enlist, and the only documented to serve in the U.S. Army, posing as a man, during the Indian Wars. She enlisted under the pseudonym, William Cathay, and was the only known female Buffalo Soldier.

World War II created an unprecedented need for soldiers. Women raised their right hand to support their country and free up men to fight on the front lines. In 1943, Private Minnie Spotted Wolf, a member of the Blackfoot tribe, was one of the first Native American women to enlist in the U.S. Marine Corps. Olivia Hooker was the first African American woman to enter the U.S. Coast Guard in February 1945. She became a SPAR (Semper Paratus Always Ready), a member of the United States Coast Guard Women’s Reserve, earning the rank of yeoman, second class during her service. Second Lieutenant Elsie Ott, U.S. Army Nurse Corps, was the first woman to receive the United States Air Medal. She was awarded this medal in recognition of her heroism in determining a way to evacuate the wounded from the front lines. She helped pave the way for further innovation in aeromedical during World War II and beyond.

In 1948, three years after the end of World War II, President Truman signed the Women’s Armed Services Integration Act into law, officially allowing women to serve as full, permanent members of all branches of the Armed Forces. As opportunities opened, women wanted to establish themselves as capable service members. This was especially true for Brigadier General Margaret A. Brewer, U.S. Marine Corps. She actively fought to preserve women’s presence in the Corps and better integrate them with their male counterparts. She also played a crucial role as the Corps began to develop regulations for pregnancy and parenthood. These principles are still in place for female Marines today. In 1978, she became the first female to reach the rank of general officer.

As the 21st century ushered in, women proved their worth in the field as well as after service, becoming power advocates for Veterans. Sergeant First Class Leigh Ann Hester was the first female U.S. Army soldier to receive the Silver Star since World War II, and first ever to be cited for valor in close quarters combat. While in Iraq in November of 2004, Lieutenant Colonel Tammy Duckworth’s helicopter was shot down resulting in the loss of both her legs. She was the first American double amputee from the Iraq War. After retiring from the Army, she went to work for the U.S. Department of Veterans Affairs and then became the first female Veteran to serve in both the U.S. House of Representatives and the Senate.

Today, out of the more than one million active-duty service members, 17 percent are female. Women’s History Month provides an opportunity for all of us to honor and celebrate the vital role of women in American history and part of our military force. Join us as we highlight the incredible and courageous stories of women who have served our nation.