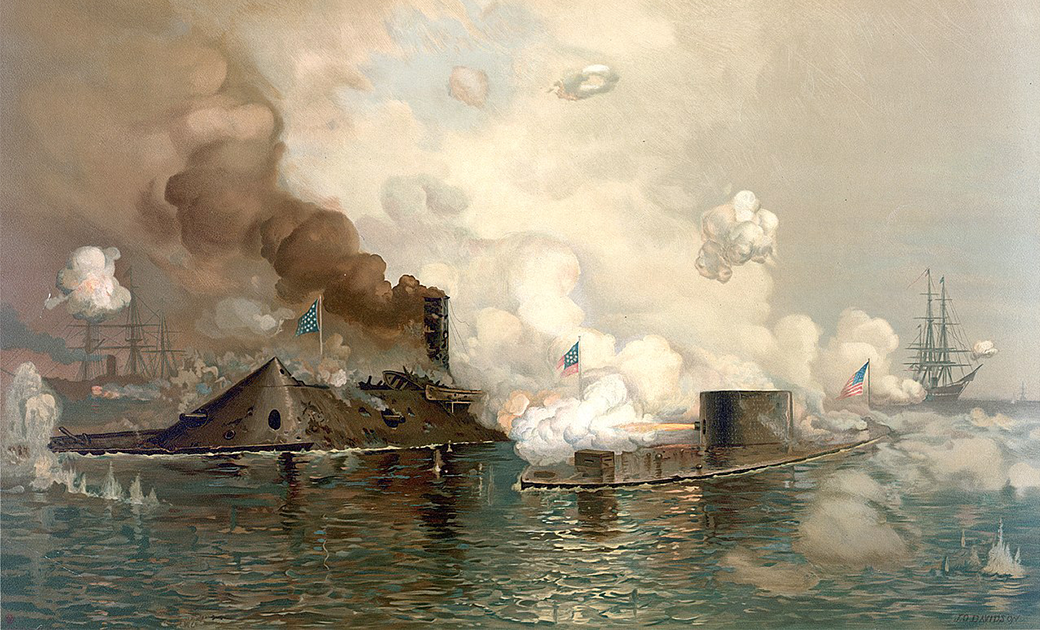 On January 30th, 1862 the first Union ironclad would be launched. Named the USS Monitor, she was one of three vessels awarded contract by the United States Navy. Designed by John Ericsson, a Swedish-American immigrant very well known for his engineering works, it would be the first American ship to incorporate a turret, though not the first in the world. The USS Monitor, best known for its engagement with the ironclad CSS Virginia at Hampton Roads during the American Civil War, was one of three ironclads built by the United States in response to the Confederate ironclad. The unique design of the USS Monitor gave it very interesting profile. It only had two guns, but they were housed in a turret that could fully rotate. To facilitate this ability to shoot in almost any direction, there was no superstructure except for a small pilot house and the venting required for the steam engine, its only source of propulsion. The hull above the water was heavily armored and sat upon a traditional wooden hull, which was submerged under the water. Finally, it had a freeboard, or distance between the waterline and the deck, that only measured 18 inches. One of the key selling points for its commission was also Ericsson’s claim to have it be built in only 100 days, which he did accomplish. The Navy was behind the ball as they knew the Confederates had already begun converting the USS Merrimack into the CSS Virginia and was pressured to commission a ship of similar type to combat it.

After the Battle at Hampton Roads, the USS Monitor would participate in the Battle of Drewry’s Bluff and be sent for repairs and refit. It would be ordered to Beaufort, North Carolina but would founder at sea while being towed in a storm in December 1862, the exceptionally low freeboard coming back to bite it. Of the 49 crew, 16 would drown in the storm.

The battle between these two ironclads began an arms race between armorers and weapons designers. Previously limited by how much a ship could feasibly carry before becoming nearly immobile, the two ironclads displayed that armor could now be attached in much larger quantities and be effective against the guns at the time. Weapon designers then would go to work to make bigger and more effective guns and ammo. Her legacy would be entrenched very shortly after her sinking, as she would be the only ship outside of HMS Dreadnought to give its name to an entire class of ships and many of those types would be ordered and developed by navies around the world.