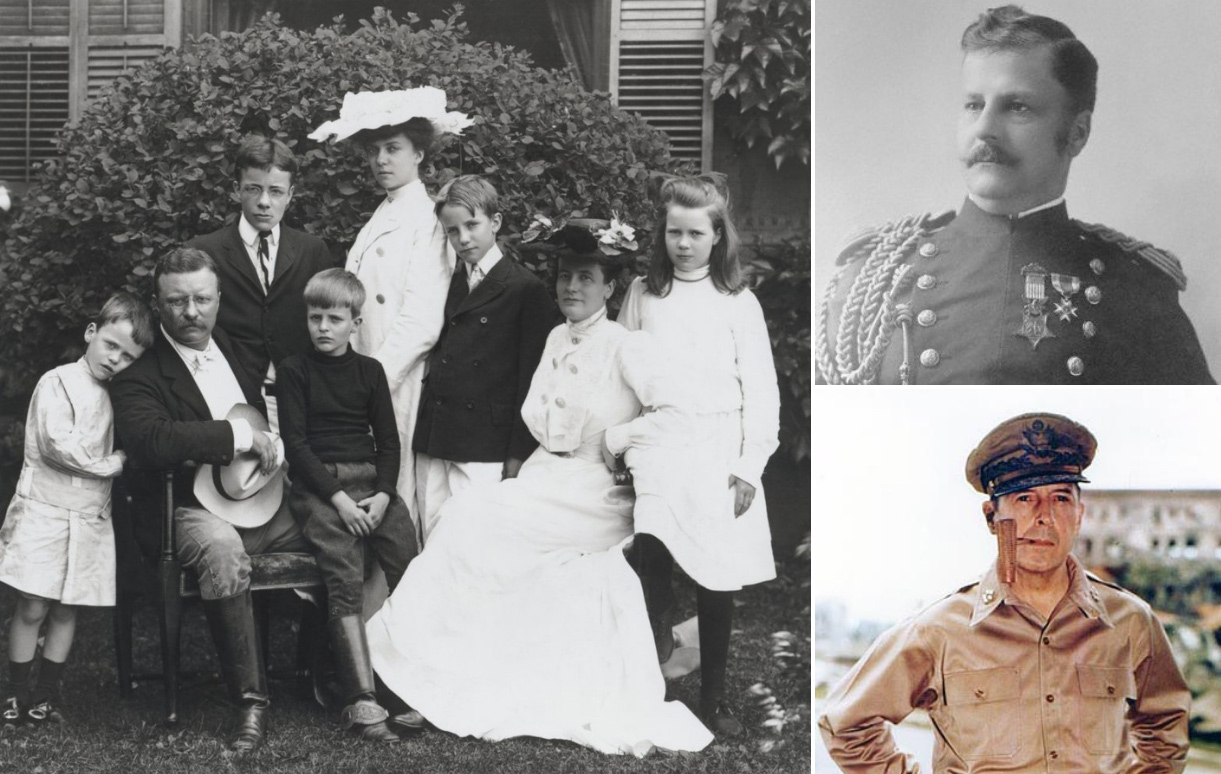 Gallantry in action. Intrepidity. Above and beyond the call of duty. Risk of life. Selflessness. Exemplary action. Unwavering devotion. Conspicuous gallantry. Extraordinary heroism. Those are the words used to describe the actions of our nation’s Medal of Honor recipients. Since its inception during the Civil War, the Medal of Honor is the oldest continuously issued combat decoration of the U.S. Armed Forces. In honor of the Month of the Military Child, we are sharing stories of the only two father and son duos who shared the heroic bonds of being Medal of Honor recipients: Arthur MacArthur, Jr. and Douglas MacArthur, and Theodore Roosevelt, Jr. and Theodore “Ted” Roosevelt III.

Lieutenant General Arthur MacArthur, Jr. received the Medal of Honor for his actions on November 25, 1863, at Missionary Ridge, Tennessee. At only 18 years old, he was part of a 50,000-man contingent of Union soldiers who stormed Confederate defenses. When his unit’s standard bearer was killed and roped their flag, he is credited with seizing the colors of his regiment and running full speed at the Confederates rallying Union troops and being shot twice before he planted the flag over the crest of Missionary Ridge. After the Civil War, he would fight in the Indian Wars and the Philippine-American War before retiring in 1909. Three years later, he died giving a speech to the Veterans of Wisconsin’s 24th Infantry Regiment. They wrapped him in the flag he carried to the top of Missionary Ridge.

His son, General Douglas MacArthur, was nominated for the Medal of Honor in 1914 and 1918 before receiving it in 1942. MacArthur’s leadership during the Champagne-Marne Offensive and Counter-offensive campaigns during World War I were noted by General Gouraud when he said MacArthur was “… One of the finest and bravest officers I ever served with.” He was awarded the Distinguished Service Cross twice and the Silver Star seven times. General MacArthur eventually received the Medal of Honor in 1942 for his leadership in preparing the Philippine Islands to resist conquest. MacArthur was cited for his gallantry and intrepidity above and beyond in action against invading Japanese forces and for the heroic conduct of defensive and offensive operations on the Bataan Peninsula. During World War II, he mobilized, trained and led an army which received world acclaim for its gallant defense against a superior enemy force in men and arms.

Historians consider President Theodore Roosevelt, Jr. one of the five best presidents to lead our nation. As a young man, Roosevelt was inspired by his family’s heritage of military service including First Sergeant George Washington Roosevelt who received the Medal of Honor for distinguishing himself at Second Battle of Bull Run and Battle of Gettysburg.

When the Spanish-American War began in 1898, Roosevelt resigned from his post as Assistant Secretary of the Navy and formed the First U.S. Volunteer Cavalry Regiment, also called the Rough Riders, with U.S. Army Colonel Leonard Wood. Roosevelt was determined to see battle and shared, “On the day of the big fight, I had to ask my men to do a deed that European military writers consider utterly impossible of performance, that is, to attack over open ground an unshaken infantry armed with the best modern repeating rifles behind a formidable system of entrenchments. The only way to get them to do it in the way it had to be done was to lead them myself.” Roosevelt was posthumously awarded the Medal of Honor for his actions; the only president to have received the honor. Inspired by their father’s service, all four of his sons, Theodore “Ted” III, Kermit, Archibald and Quentin, served in World War I and II, but only one received the Medal of Honor.

At the outbreak of World War I, Theodore “Ted” Roosevelt III, who was recognized as the best battalion commander in his division, volunteered to go to France. He eventually commanded the 26th Regiment in the 1st Division as a lieutenant colonel and fought in several major battles, including America’s first victory at Cantigny.

During World War II, Roosevelt returned to active duty in April 1941, and was given command of the 26th Infantry Regiment, part of the 1st Infantry Division, the same unit he fought with in World War I. Late in 1941, he was promoted to the one-star general officer rank of brigadier general. Roosevelt landed with the first wave of the forces assaulting the enemy-held beaches in Normandy where he repeatedly led groups from the beach, over the seawall and established them inland. His valor, courage, and presence in the very front of the attack and his complete unconcern at being under heavy fire, inspired the troops to heights of enthusiasm and self-sacrifice. On July 12, 1944, a little over one month after the landing at Utah Beach, Roosevelt died of a heart attack in France. At the time of his death, Roosevelt had been recommended for the Distinguished Service Cross but was upgraded to the Medal of Honor.

Of the 40 million Americans who have served in the Armed Forces since the Civil War, only 3,511 have received the Medal of Honor. As we look at the legacy of military service within these two families, we are reminded of the value of being a part of something greater than oneself. Their patriotism continues to inspire generations to this day.