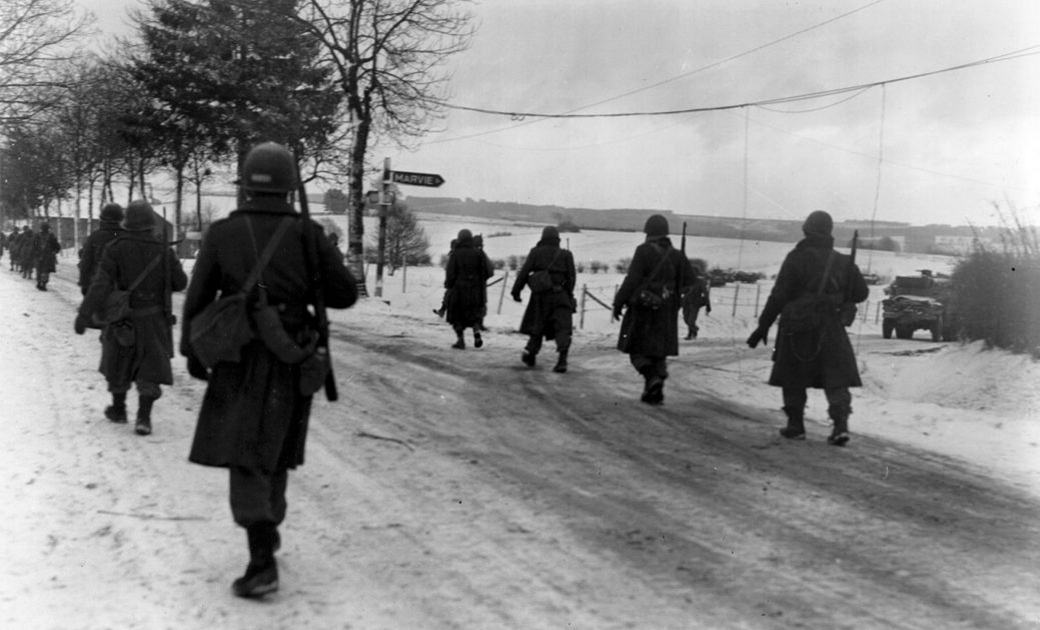 Last month we discussed the beginning of the Battle of the Bulge and its impact during the World War II. Today, we will look at three powerful accounts from the battle.

Harold Berkman was drafted into the U.S. Army in 1944 shortly after completing high school at Monticello, New York. Upon his completion of basic training at Camp Croft, South Carolina he was deployed overseas and assigned to Company F, 2nd Battalion, 317th Infantry Regiment, 80th Infantry Division. While traveling, men returning from the front lines told him that the best job was a mortarman, as it was the most protected. Upon getting to his unit, their first lieutenant asked if anyone was a good mortarman, to which Berkman raised his hand. The Lieutenant pointed at him and said, “you are now a machine gunner.” Berkman was assigned to their weapons platoon as an ammo bearer.  Though he was not present for the 48-hour push into Bastogne led by General Patton, Berkman would take part in the allied counteroffensive into Germany. Berkman recalls the necessary extremes that everyone went through, especially while traveling at night because of how easy it was to get left behind and lost if you fell out for any reason, as well as the terror of hearing tanks moving around in the night. He vividly remembers the night crossing of the Sauer River between German and Luxembourg, which under artillery and gunfire, would be crossed.

Verland “Jerry” Devon was drafted into the Army in 1942 shortly after completing high school and was trained as a combat medic. He spent most of his time training to fight the Japanese, but come 1944 his unit, the 99th Infantry Division, was routed to the European theater to push into Central Europe. Jerry served around the Elsenborn Ridge, in Belgium, which was the only location the German’s failed to advance during their offensive. Devon recalls being moved into the area by truck and the locals were lined up passing bottles of beer to the troops as they went by. When the attack started, Devon got permission to relocate to the front line to assist in aiding the wounded. He vividly remembers treating shrapnel wounds from German artillery, working day and night along with the other medics to triage as best as possible, amputating when necessary. The only pain medicine they had was morphine for the troops. Verland would be wounded by shrapnel in the back when a pair of German tanks fired into their location, killing 10 and wounding 7 others, Verland included. He was evacuated to Paris to recover, spending 19 days there before being sent back in early January. At this point, he recalls getting rid of his medical cross helmet, as the German Wehrmacht were shooting at medics and generally not taking prisoners. Once returning to the frontlines, he continued to treat soldiers and their grievous wounds, the entire time without carrying a weapon.

Vernon German was married and worked as a store manager in the years before the attack on Pearl Harbor, signing up for the Selective Service in September of 1940. Having never been called, he finally enlisted in October of 1943 and after basic training was accepted into Officer Candidate School, commissioning as an Infantry officer. He would leave the states a year after his enlistment and begin his journey to Europe in October 1944. When he arrived, he was assigned as a platoon leader for Company C, 345th Infantry Regiment, 87th Infantry Division. On the 23nd of December, just outside of Medelsheim, 2nd Lt. German would lead an attack on a German pillbox, but not return. The 87th would be removed from the frontlines and repositioned that same day, reporting him as Missing In Action to his wife, Roxie, on January 15th. His body would not be discovered until the spring, officially listing him and informing Roxie that he was Killed in Action in June, 5 months later.

The Battle of the Bulge is the third deadliest campaign undertaken by the United States Army to this day, with approximately 19,276 causalities. It is only eclipsed by the Battle of Normandy from the D-Day landings to the 25th of August in which 29,204 American troops were killed and the Meuse-Argonne Offensive from World War I that cost 26,277 lives. While remembering and learning from those who were there and survived, we must also remember the ultimate sacrifice made by many service members and their families.

Golden, Kathleen. “The missing man: One family’s story of the Battle of the Bulge.” National Museum of American History. December 17, 2019. Accessed January 20, 2021, https://americanhistory.si.edu/blog/battle-of-the-bulge?utm_source=feedburner&utm_medium=feed&utm_campaign=Feed%3A+OSayCanYouSee+%28O+Say+Can+You+See%3F-+National+Museum+of+American+History+Blog%29

75th Anniversary of the Battle of Iwo Jima